Hey all, wanted to start a thread here to capture discussion surrounding updating our two spaces to allow for key-less entry. We’ll be building on the Authbox work that was done last year to authorize power to the laser cutter. That project has proven to be very stable and should be relatively easy to extend as the basis for an RFID based key-less entry system. I’ve already verified that the RFID reader we used in Authbox will work through the glass everywhere it needs to.

People who have been actively involved in discussions around this topic so far have been myself, Jenn Rand, @Elliot_Wells, and @Mark_Rosen. There are ostensibly four entrances that need to be worked out; two in Press Bay Alley and two in Press Bay Court. The problem boils down to designing or procuring actuation subsystems to unlock the respective doors, and then integrating them with a 5V control system (i.e. an light flavor of Authbox plus a 12 or 24 Volt relay).

We have a general constraint that the entrances should not alter (or at least continue to use) the Sargent lock mechanisms so that the buildings can still be consistently keyed by the landlord (@Elliot_Wells can correct me if I’ve mis-stated anything there).

Alley Exterior Door
Of all the entrances involved, we have the least liberty to alter this entrance since it is a shared entrance for the all occupants of the building. From the inside, there’s a crash bar. What we’re envisioning for the actuation here is something that, when 12V or 24VDC is applied will engage the push bar from the inside, and will naturally otherwise disengage (and not obstruct normal manual functioning of the entrance). One idea I’ve heard is some kind of strap harness that can be “pulled tight” by, e.g. a servo to depress the crash bar. I reckon something like this would do the trick in conjunction with one of these.

The other doors
We think these two might be able to be addressed in a similar manner to one another. Essentially we’d replace anything that looks like a rotary deadbolt mechanism with a self-locking mechanism that automatically locks whenever the door closes. Then we’d integrate electronics into the door frames with some kind of solenoid actuation mechanism that would perform a short-term ‘release’ sequence to briefly unlock the door. I’m fuzzy on the details of these ones, but I think @Mark_Rosen is investigating options here.

At the next Tuesday night meetup I expect to have one of those servo motors and one of those 12V relays to try out with the bench power supply and an Arduino.

Was an electric strike considered at some point?

Yea, I think that’s essentially what the proposed solution “The Other Doors” is… but I’ll let @Mark_Rosen confirm.

PB-Alley Main Entrance: Currently PBA uses a Sargent lock-set that requires a twist of a key (Or knob from the inside) to lock or unlock. When you lock it, a heavy latch rotates into the hole that’s cut in the door post.

I proposed shifting to a lock-set that locks every time the door closes, like a regular home door. We’d need to swap out that old mortise and replace it with another Sargent mortise like the one pictured (it would be set up for the same key and knob manual open action). This one I found online was $220.00. It’s also possible that our Landlord may have one of these on hand - ready to swap in. It would use the current key set and knob, but would have a spring-back feel.

Looking at the strike-plate in the picture, I get the feeling that we’d fit a electric strike-plate that has a curved part on it so the door closes smoothly. That means that the door post will need a fancy cut-out. This mod would have to be cleared with the landlord, but it would still function and look fine with any lock-set configuration in the future (if they ever have the desire to change it back). The electric strikes that I looked at were under $20, but I still need to confirm that all the parts would fit and function together. The Inner alley door and inner court door both seem to be candidates for a low-cost electric strike solution.
Will follow up soon.

Just for fun, here are some videos of hacking a Lockitron, which was a short-lived product provided by Sparkfun and Adafruit, but I’m guessing they got a cease-and-desist or something from the company at some point. 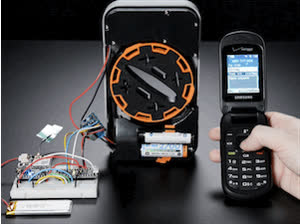 Wouldn't it be cool if, instead of having to give your dog-sitter a key to your place, you could just text your home to let her in? Now we build it ourselves using the new Lockitron body, Metro Mini (tiny Arduino-compatible) and a FONA 800 cellular...

I bought a used Lockitron off eBay just to play with, and we are welcome to incorporate it into this project if it makes life easier in some way…

Just thought I’d share that things are progressing on this project. We have all the electronics ready to rock. We’re just working through logistics of making modifications to the various entrances to install electronic strikes into door frames where applicable,and drill holes in various places to run wires to RFID reader coils.

For anyone who’s interested, here’s a wiring diagram of the Keyless Entry flavor of Authbox: Dashed line represents what’s inside the box, versus what’s external to the box.

I bought some of these to make the wiring job a little less chaotic. We’re also going to need a four sets of micro USB cables and 3-prong power cords to chop up and install… I figure the re-use center should have some we can pick up inexpensively.

Also FWIW, I reverse engineered a schematic of what’s on those 12V Relay Modules, and it looks something like this: I’ve been playing with this down at IG today and there’s an ugly side-effect that I’m seeing where when it “deauthorizes”, sometimes Arduino takes resets and the relay goes through a short period of meta-stability (clicking on and off multiple times" before settling into an off state.

I am pretty sure I know why. You can get those relay modules in 5V and 12V varieties, and based on my reverse engineering of the module, I really should have got the 5V-variant, so that I can take advantage of our isolated power supply. That way the 12V is only ever seen by the electric strike, and the grounds of the 12V and 5V side need not be coupled together. I’ve ordered some of the 5V relay modules and they should arrive on Monday. Here’s an updated drawing / wiring diagram:

We are one step closer today. The electronics were connected for a time to the electric strike which, thanks entirely to @Mark_Rosen, is now mounted securely in the wall along with the RFID reader antenna, for the interior door of the upstairs space.

Mark is also designing and crafting a face plate to put over the RFID antenna, and managing a small tweak that needs to be done by Ace Security so that the door can be opened by a physical key, but automatically re-locks when the key is removed (this is called a Storeroom Lockset configuration in case anyone is interested, see here for more info).

We still need to get a box to house the electronics in that can be mounted on the wall near the door. I think Caleb Harrington is going to work some magic there. Next up, the other three doors. Onward and upward!