The fire inspector asked that we remove power strips plugged into extension cords. I suggest that the tool committee purchase at least two extension cords to hang over the tables that have three outlets like this:
http://www.grizzly.com/products/Cord-Reel-12awg-x-40-/H5695
This one is 12ga so it’s a little more expensive than some others.

@vicatcu @Bez we should probably take care of this as soon as we can, want to keep John & inspectors happy!

$78/ea * 2 would be $156, that seems a bit pricey to me, don’t you think? I mean, if @Bez is on board with the idea, I’ll certainly approve it, as the tool committee hasn’t spent it’s $50/moth allocation in quite some time afaik. What about a few of these instead? If we have consensus on it, I can order three from Amazon and bring them in on Tuesday night.

Link missing, what are “these”?

I think the thicker 12ga wire is worthwhile (some of our tools draw beaucoup amps) and the retracting capability is worthwhile (IG has evolved to have power cords over the table). If you can find a less expensive power cord with these capabilities go for it. 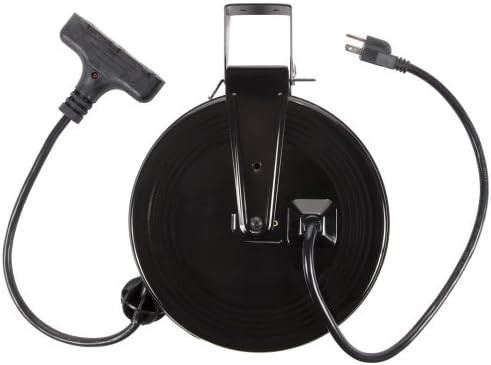 The “don’t plug power strips into extension cords” issue has come up both at IG and at work, and I’ve heard conflicting things about it. So I’ve felt motivated to do some research to find out what the issues are. Here’s what my current understanding is (and we can use this to drive the conversation, if we want):

As such, I do not like the idea of a long coiled extension cord permanently mounted above the table. I’d much prefer a power strip with a 25’ cord, perhaps suspended by some sort of retractable tether (all the ones I can find on Amazon are either (a) designed for holding keys and the like, and wouldn’t suspend a power cord, or (b) designed for holding people in harnesses, and have long steel ropes and cost $$$, nothing in between).

None of the equipment in the front room are heavy current-draw devices, except the space heaters. I think we only have one 15A circuit there anyway. We don’t have a tradition of power dangling from the sky in the back room.

Now that I look at it, I don’t think we need any more extension cords in the back room. The table saw and arm saw both have dedicated cords. There are a couple of extra cords lying about for hand held power tools. There are extension cords hanging over the west workbench and center table which seem adequate as long as people don’t attach power strips to them. Cords in the back room can be single outlet because they are most often used with one tool at a time.

The cord hanging over the table in the front room should probably be multiple outlet since they often have multiple laptops, soldering irons, etc. plugged into them. I imagine at least six outlets. But I defer to others who use the front room more than I do.

John clarified about extension cords. He says we need to take down any extension cords that look like we intend them to be permanent fixtures. We need to replace them with “power strips with circuit breakers in them that have long cords”. It’s okay to use an extension cord for temporary power but as soon as we affix them to the ceiling or walls that’s not okay.

Laurence that sounds good… can you ask him if we just roll it in with the rest of the Common Area Maintenance charges? Whatever works for him is fine with me, I think we can stomach $15/year.

Vic what do you think of this one? http://www.amazon.com/dp/B000WJEUX2?tag=price190-20
It has a big stable end that will sit flat on a table and a 25 foot cord. I’m not sure who else wants a say, such as Bez, but we should order something soon and replace the one over the table in the front room.

That one looks good to me.

My feeling is $156 is a bit much just to keep the ceiling cables.
A long power strip and some corduct would be $66 - we could run it from the couch end.

OK I’ve ordered these items, they should be here by Wednesday at the latest. /cc @laurence

The joys of Amazon’s dynamic pricing!